THERE’S A BIRD PERCHED ON A BRANCH HIGH IN A TREE.

WRITE FROM THE PERSPECTIVE OF THE BRANCH.

Today we get playful. Once again we work the Limerick. The nonsensical feel of these ditties remain to touch a heart, a head or funny bone.

Lines three and four are also linked (B).

Get gaudy, bawdy, raucous, nauseous, cautious, rambunctious or thoughtful. Just give this awful rhyme some of your time. You may be surprised by the results!

On Wednesday’s we play with a form,

a practice that’s become the norm.

I chose it because I am sick

and I hope that it kills this ill storm.

Ok Yogi Berra had it right. It ain’t over until it’s over. And Marie and I are far from that determination! We’ve come to pick each other up when the other has stumbled, and today’s prompt is no different. Marie went high for her part of this process.

Marie writes: For today’s prompt, use the word “over” in your title, or in your poem.

Over the top
It’s all over
Overwhelmed
Over the moon
Over the rainbow
Overdrive
Overhead
It ain’t over ’til it’s over!

Walt adds: I’m going under the radar for my nudge. Use the word “under” in your title, or in your poem.

Under the Weather
Under the Sea
Underground
Underwhelmed
Under her spell
It ain’t over ’til it’s under!

Wait, what? You know what I mean, write to this conjoined prompt. (Write one of each if you are so inclined!)

Blue skies and bright sun
smile above me, while I am
under the weather.

Dusk fell across the valley like a funeral shroud;
obliterating the light of day and hiding its wretched decay.
The hollow below held no trace of vegetation;
the furrowed land sat fallow and empty,
not even possessing the essential nutrients
to imply that the soil was once fertile.
The chain link fence held it in containment
as it rose above the barren void.
It gave the appearance that the Grand Master
had taken His pencil eraser and wiped
all that was beautiful and promising
off of His canvas. But it was a recipe
that had provided many great things.
One could be forgiven that the valley
lay disinterested in its plight.
The right Operator would return her
to its former productivity. Patience will grow.

WRITE YOUR PIECE WITH THESE IN MIND.

Today we revisit and old classic – the Sonnet!

The SONNET is a poem that consists of 14 lines, usually in iambic pentameter, with rhymes arranged according to one of certain definite schemes.

In the strict or Italian form it is divided into a major group of 8 lines (the octave) followed by a minor group of 6 lines (the sestet). An a-b-b-a, a-b-b-a pattern became the standard for Italian sonnets. For the sestet there were two different possibilities: c-d-e-c-d-e and c-d-c-c-d-c. In time, other variants on this rhyming scheme were introduced, such as c-d-c-d-c-d.

WALT’S REPRISE: (with hopefully a new effort in a bit)

Love is the tender trap that snares the heart,
from eyes’ first glance the ember’s passions start.
And so to bless two souls in search of love,
who in each other’s heartbeats they do move.

The snare so baited lures her to his arms
where he becomes enraptured by her charms.
A gentle hold upon him she does reign,
to touch his very life and soul again.

He, once the hunter now becomes the prey,
the tender trap is set to save his way,
a sanctuary there within each chest;
a safety sure, procured in nurture’s nest.

Evasive hearts surrender, for ’tis true,
there is a tender trap set just for you! 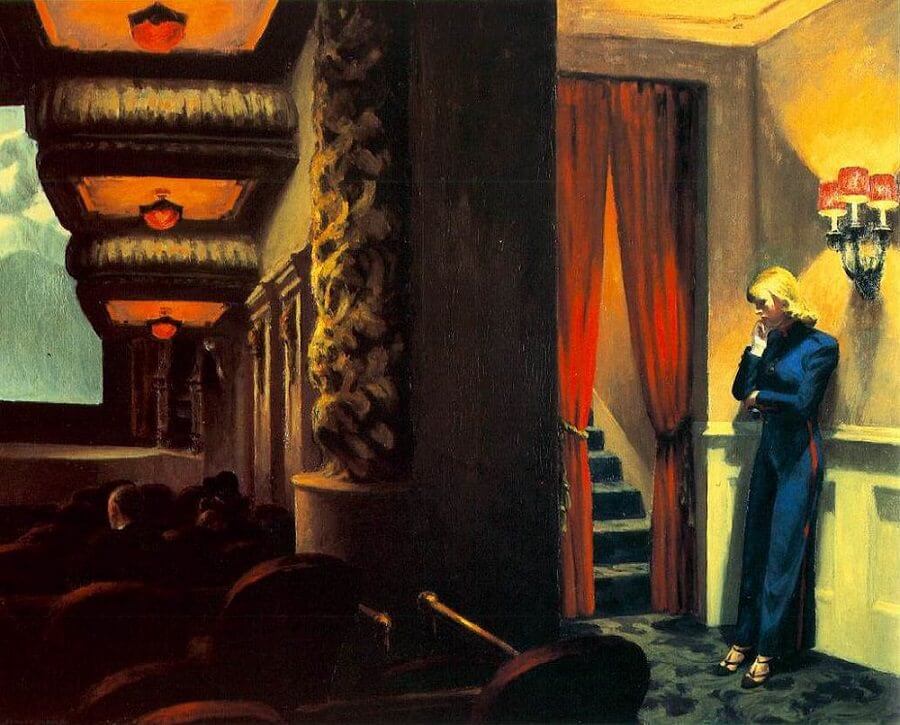 We haven’t done a photo prompt in a long while so I thought it was about time that we did! The extraordinary works of artist Edward Hopper have been thought provoking and have inspired many writers and poets throughout the years. I’m sure we’ve all written to a Hopper painting at one point in our poetic endeavors. Stepping away from the usual (popular) offerings (many found at www.EdwardHopper.net) I’ve found this print of Hopper’s “New York Movie” (1939). Derive whatever inspiration you can from this painting and write your poem.

It has been four years
since we nearly lost Izzy,
our grandbaby girl.

It has been two years
since my mother passed on to
the heavenly realm.

Now my son-in-law’s
mother is hospitalized,
fighting for her life.

a film I am in,
but choose to view from a safe
distance. Unseated.

She stands alone,
pensive and detached,
attached to the dark shadows she lurks.
The audience does not see her,
lost and absorbed in her self-loathing.
Her clothing indicated her position
a condition of her employment.
Her enjoyment and ambition
long left languishing in her dreams
of becoming the next best vision
on the silver screen. Life didn’t mean
to deal her this hand as she stands:
alone, pensive, detached.
She knew she belonged in the theater,
but this cruel twist of fate has her sealed.
She ought to be in pictures, but
her life sadly ushered her into this.

Cupid should have wings! wired.com

Cupid has a secret!

Write that mystery into your poem/flash fiction.

The Tanka is a Japanese poem of five lines.

The first and third lines are composed of five syllables, and the others contain seven.

In Japanese, tanka is often written in one straight line, but in English and other languages, we usually divide the lines into the five syllabic units: 5-7-5-7-7.

“Well, thank you! That’s just what I needed!”

I think we’ve all said that at least once in our lives. Or at least, I hope so! If you can think of an instance in which you felt like you received exactly what you needed, you might draw on that for inspiration. If not, where does the very thought of it take you? Let’s hear it! Maybe it will be just what we needed!

In April of 2009,
I shyly met poets online.
But there was one who
would help me break through.
I call him my partner in rhyme.

Thursday sneaks in and again
I’m drawing blanks and blank stares,
Somewhat unaware of the next thing.
The thing is that the poetry prompts
Haven’t been all that for a bit.
I struggle with this vacancy,
This thought complacency.
Then a message comes through.
“Do you want some help with the prompt?”
This ten year romp with one who knows
What I need, when I need it;
knows me better than me lately.
It greatly shows it’s worth. She sends
in the troops to save the day.
That’s ok. Sometimes we need that hand
And it’s grand. It’s just what I needed.