We’re off to the movies again! Today our selection is Summer Magic! 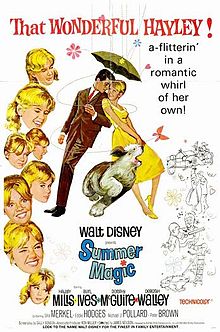 Summer Magic is a 1963 Walt Disney Productions film starring Hayley Mills, Burl Ives, and Dorothy McGuire in a story about a Boston widow and her children taking up residence in a small town in Maine. The film was based on the novel Mother Carey’s Chickens by Kate Douglas Wiggin and was directed by James Neilson. This was the fourth of six film Mills did for Disney, and the young actress received a Golden Globe nomination for her work here.

There is a certain magic to summer. Well, at least when we were younger and we had more summer to enjoy. We’ll be taking a step back, when our responsibilities were more simple (but here’s hoping we acted responsibly) and find something magical about a summer moment! A first love, a day at the beach, playing baseball, a picnic… My thought is much like my idea of inspiration… it is everywhere you look! Maybe it was your first trip to a Disney park (it is the Magic Kingdom after all!) The magic is in your memory, heart and your words. Wow us with some poetic prestidigitation! Write the magic!