We’ve immersed ourselves in water for this prompt and the words flowed as if the floodgates were open and left to run free. And yet we made our choices:

I have a partiality to the seashore and this vignette seems hauntingly familiar to me. Marian had captured the scene precisely. It spoke to me in hushed tones and my heart was touched by this poem. 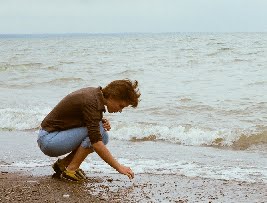 This photo is exactly your poem Marian!

An obvious choice for my bloom.

At the Edge of the Sea by Marian Veverka

She stoops and bends her knees,
draws her hand along the still-wet sand
The tide is turning and the sand
for the moment is newly-born.
She cannot resist the small shining
shells peeking from its surface.
Carefully she slips her hand beneath
them and draws them out.

This sky so intensely blue.
This solemn sea, the sea-gulls
wheeling, crying.. The waves
breaking on the sand without a sound
For a moment all of it is hers…
then gently, she lets it slip
from between her fingers.

It’s a pleasure to award my final “Bloom” to RJ for this poem. For me, this piece has its own magic in the form she chose; in the alliteration and assonance it contains; and in the allusion to dance, an art form that is, in my mind anyway, well suited to this poetic form. In addition to that, the poem places the reader in the orchestra pit, alluding to the passive-active involvement that readers have with poems as they read (or hum) along. In short, this poem works on so many levels, including the playful point of view that RJ often brings to her work. In my opinion, this poem, like the poet herself, is a treasure.

“If there is magic on this planet, it is contained in water.” ~Loren Eiseley

You only have to glance at it,
as sunlight glints on its expanse.
Magical enchantment rises

and then, your gaze just cannot quit,
because you’re beckoned to the dance.
You laugh. You laugh at its surprises

and by its shoreline you will sit,
in contemplation, dream or trance.
All’s revealed. There’s no disguises.

You’re in nature’s orchestral pit;
You hum along, your one great chance.
Unscripted time improvises.

I thank Marie and Walt for the opportunity to contribute to this site in Walt’s absence. It was great fun but it was just one of those things; a trip to the moon on gossamer wings, to borrow a couple of Cole Porter’s lines. Eventually, the garden comes around right again: it is gratifying that Walt is back at the hoe, even as it is sad that Marie is not. In the garden as in life, however, evolution goes on; there will be exciting times as the garden grows—and perhaps changes—under the hands of all of us who love it.