We come upon another Web Wednesday, and our choice this week is as interesting a poet as you’ll want to know. Her wit, humor, sarcastic edge and attention to detail puts her work on the fast track to which poems I read with regularity. She is truly one of a kind. Join Marie and me in welcoming Barbara Yates Young.

Barbara, we have been enjoying your work at the Writer’s Digest Poetic Asides with Robert Lee Brewer for quite some time now. And you seem to pop up on many other popular poetry sites. Your exposure has broadened your appeal. You are one of the poets we both search out when reading time is limited, and one we’ve looked forward to getting to know better. So let’s get right to it.

“Is there a poem you feel best expresses your writing? Why did you choose that particular piece.”

If I could learn grace, watching your hands dance,
in that moment there would be one new waterfall
a small one. or a Doric column. I watched a potter, once,
pull tall clay walls, kicking the wheel all the while, foot and hands
seemed unimportant blurs. The moving clay became time,
malleable and magical forgiving of mistakes,
it rose, wobbled, and returned itself, to the dictates
of those graceful blurs. In such a way you tame
eternity, shaping it with strings bent to your will.
because you wove sound in such pauses and darts
I stood watching dragonflies shuttle and skirt
the green back yard and heard their flit and swirl
garnet and gold in the shadows and beams as song.
and I felt time bend like water around stone.

I suppose this will do as well as any other. I like it. Like most of the poems I write, it was for a prompt. I like prompts that bring things to me from somewhere I wouldn’t go on my own. In this case, it was a YouTube clip of a pianist. I believe she was playing Chopin, but her hands caught my attention. They were beautiful old hands.
This is probably the closest I can come to a sonnet. Trying to write within the constraints gave me something that wouldn’t have existed otherwise, but I do not like exact rhyme. It’s like being hit over the head unless the poet is damn good.

You (humorously and poetically) describe yourself (the near-sighted broad) as follows.

“A southern woman of a–certain–age.
If crossed,
apt to become passive-aggressive.”

I find that amusing and charming. It’s brought a smile to my face more than once. You add to it that you are “… a boring person, sincere but flawed.” Flawed? Aren’t we all. Boring? I beg to differ. I’ve seen your poetry. I’ve seen your art. I’ve seen your style. I’ve seen your sense of humor. I’d be willing to bet the word “boring” wouldn’t cross anyone’s mind but your own. Which takes us to question #1.

1. How do you define “boring,” and what about you do you believe fits that definition?

I am boring. I never DO anything. I’m pretty much a mass of nouns and passive verbs. For example: When I was a kid, and read all of those horse books, I asked for a horse. I got one, but never learned to ride. Just looked at her. Possibly because of being too shy to ask how it was done. You can miss out on a lot by being afraid to ask.

2. On the flip side, what would you say is the most interesting thing about you? (Besides being married to a guy from Walt’s hometown, Lackawanna, New York!)

Really not much (aside from my Lake Erie husband, of course)
I’m a TV junkie. All the way back to Sky King. Television is such a comforting medium. I grew up on three networks in a precise grid. Everyone you knew would have been watching one of three programs at a given time. Now: True Blood. I mean, the theme begins: When you came in the air went out.

3. “Just minding my own business, and then realized the way out had disappeared.” This quote introduces us to Briarcat. Please tell us how you chose “Briarcat” as the title of your blog, and how this particular quote fits in.

It’s a little roundabout. I wanted “Catbriar”, but the blog name was taken. The quote goes with that word. I was walking in a pasture on my grandparents’ farm, just wandering around, being a kid, following cow paths and rabbit tracks through the sedge grass and smilax (that’s the catbriar). All of a sudden, the path I was following dead ended into a mass of blackberry canes, and when I turned around to go back the other way… it seems some paths only go in one direction. It’s a lesson that keeps popping up. You know about B’rer Rabbit and the Briar patch? It’s the Trickster element that blows my mind. Trickster’s not safe, and you never know how your interactions with him will turn out.

4. One poem that shows off your delightfully quirky sense of humor is “farewell,” written in April of 2010. And, yes, it comes with a visual! *winkwink.”

unsure of how to say good-bye
she wore a proper suit, black,
to express her loss and sorrow.
the flat clutch, nubbed silk
matte silver clasp, contained
her nose-and-glasses mask
and red and silver glitter
just in case

This petite poem shows off not only your skewed wit, but your ability to tell a story while doing no-such thing. Your descriptions skillfully lead us down a formal corridor that makes a sudden and sharp turn toward madcap. Did this piece come strictly from your mind? Or is there a true story behind it? Do tell! I imagine you to have a great laugh. It usually comes with that whimsical attitude you possess. Describe your laugh.

That poem was for the last prompt at ReadWritePoem. I was in mourning. Really. I loved that site. It was something like a home. For all that Poetic Asides was a new beginning, writing poems after 30-odd years away, RWP woke me up and started me thinking in different directions. Diagonals and zigzags. That’s the way my sense of humor works, but who knew you could write poetry that way?

The nose and glasses thing comes from way back. The same friend who used to throw great parties for Darwin’s birthday. It seemed the perfect thing to go with the funeral dress and that purse. I love those tiny bags because they’re beautiful, but–seriously–what is there room for inside them?

(alas, I do not have a clear, bell-like laugh. More of a snort, snicker, chuckler)

I have a new nose and glasses image. Stole the cartoon from one of those New Yorker add-your-own-caption things. 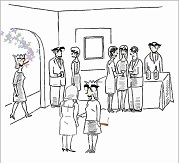 5. The artwork in Briarcat fascinates me, Barbara. When you considered having your own blog, did you visualize using artwork as you do? Is the art normally born of the poetry, or vice versa? Your look there is constantly in flux, in a high functioning way. Does that coordinate with your muse?

I really don’t think of it as art. I play with Photoshop (Elements. Can’t afford the real thing). It’s all just moving pixels around and copying and pasting. I steal images from the internet take them for joyrides, and try to make them unrecognizable when I use them. Real art doesn’t have an UNDO button.

I wish I could make things up whole. The idea of creating an actual, concrete thing from nothing. It is magic. All the spells in all the fantasy novels can’t make that thing that never was before. An artist can. Does. Did. Will. It’s so cool.

6. Who would you say is your favorite poet? Do you try to emulate him/her, or is your style completely original? (Walt’s answer for that last question is, “Yes, her work is one-of-a-kind!)

Okay. Confession time. I don’t read poetry. Not really. Not for pleasure. Sitting down with my cup of tea and someone’s slender volume. That’s a pretty picture, but I’m not in it.

I had to memorize lines of poetry in seventh grade to bring an English grade up to a “C”. Thirty lines would average in another point. Thank you Robert Frost and your snowy evening. Fast forward to college and a few poetry and creative writing courses: Dylan Thomas and Gerard Manley Hopkins. They are probably my influences. And e.e. cummings. (Ogden Nash, but don’t tell anybody). I like Bukowski–had some years like that.

7. Approximately how much time do you spend writing poetry?

My husband Jim tells me Dylan Thomas would work all day on one line. I’m pretty much down and done. A poem may take ten minutes or four hours.
Revision. That’s the diet and exercise part, and I am seriously overweight. My punctuation is sloppy. Every time I reread one of my poems, I will find something that needs fixing, and it’s usually punctuation.

8. Is publication of a poetry collection in your future plans?

not (expletive deleted) likely. I mixed up a couple of collections for Jim and my brother, Glenn, for Christmas. That made me crazy. Plus, I really can’t imagine anyone reading even so much as a chapbook of only my stuff. Maybe my cousin, Rita. She’s a saint. In a good way.

9. Your feet are planted in Tennessee. What does that provide to your inspiration? The strong musical ties to the state as a whole brings a lyrical aspect to your poetry. Do you agree? Do you find you are most productive (writing-wise) during daylight hours? Or are you a night writer?

Growing up southern does have its rhythms. We talk slowly. It takes a long time to get in all those extra vowels. (invisible). It’s hard for me to imagine how my sentences would sound read by someone else.

The Tennessee I grew up in was black and white. And, like breathing, nothing you think about. I must have been seven or eight when I went to Rock City and noticed the water fountains. There was one labelled “Whites”, and one “Colored”, and a third for “Dogs”. That bothered me for a long time. I had friends from Thailand before I’d had a conversation with a black woman of my own age. I became a cynic early.

As to habits and such, I used to be a night person. Finish the book in one sitting, even it it’s dawn. Close the bar, and then move to coffee. I used to watch those crazy preachers with the incredible cadences who came on after the midnight movies, and then go to sleep to the cartoons. Depression threw everything off kilter for a while, and along with the habit of reading, I lost those circadian rhythms. These days, it’s mornings when I write. I move back and forth between paper and iPad and laptop and paper and and and. Mistakes are more glaring in the blog.

10. If we could know only one thing about you, what would you tell us?

I’m superficial. I begin with words and find some sense in the way the pattern falls out. That makes for some mutable truths.

Thanks, Barbara, for that entertaining interview!